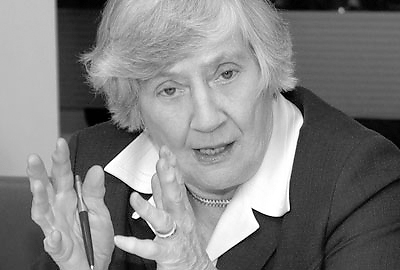 We were saddened to hear of the death of Shirley Williams on 12 April 2021. Shirley played a key role in the foundation of the SDP and of the Liberal Democrats, led the Liberal Democrats in the Lords from 2001 to 2004, and remained active in the Lords and the party until her retirement in 2016. Unusually amongst politicians, she was held in great affection by almost everyone she met.

She was a good friend to us in the Liberal Democrat History Group: she was a speaker at no less than four of our meetings. The last piece we carried about here was an interview on the SDP and Europe in issue 98 (spring 2018). We will publish a full appreciation of her life and career in the Journal of Liberal History in due course; in the mean time, we reproduce here her entry from our booklet Mothers of Liberty: Women who built British Liberalism, published in 2017.

Shirley Williams has played a major political role for over sixty years, a remarkable achievement and almost unique for a woman. In her adolescence, her parents were among the senior echelons of the Labour Party and before she was twenty, she became Chairman of the Oxford University Labour Club.

In the post-war years, Oxford student political clubs were large and lively. Her contemporaries included JeremyThorpe, William Rees-Mogg (later to become editor of The Times) and Robin Day (who became an outstanding television interviewer). At Oxford she also met Dick Taverneand Bill Rodgers, who were to share much of her political life. Women were denied membership of the Oxford Union, the seed-bed for rising young politicians, but despite this obstacle she was already competing with the brightest and the best.

An actress as well as a politician – playing Cordelia in a production of ‘King Lear’ at home and in the United States – she was admired as an ‘Idol’ in the leading Oxford student magazine. Her friends saw her as having an unusual combination of ambition, intellectual ability, physical energy, friendliness and passion. Their only doubt was whether her qualities would shine as vividly in the tough, unsentimental world outside.

Shirley Vivien Teresa Brittain Catlin was born on 27 July 1930. Her parents were George Catlin, a political scientist, and Vera Brittain, a feminist and pacifist who had written Testament of Youth, a highly successful inter-war autobiography (it was made into a film in 2014, in which Shirley assisted). They lived in a comfortable home at Cheyne Walk, Chelsea, and she was sent to the fee-paying school, St Paul’s. By her own account, Williams was devoted to her father, who was a major influence, while she found her mother conscientious but rather remote. It was her father’s commitment that led her to become and remain a practising Roman Catholic. In 2003, she set out her personal reflections on politics and religion in her book God and Caesar.

After leaving Oxford, she spent most of a year in the United States and two years, not particularly happy, as a journalist on the Daily Mirror. But in 1954 she fought a Parliamentary by-election at Harwich and although it was an unwinnable Tory seat, she gained experience, was recognised as an able young woman and began to climb the greasy political pole.

During the course of her career, she fought twelve Parliamentary elections – from 1955 as Shirley Williams, following her first marriage – losing six and winning six. She served as a minister for more than half of her seventeen years in the Commons. Until she was elected for Hitchin in 1964 (Hertford & Stevenage from February 1974), she was General Secretary of the Fabian Society, and by 1970 she had become a member of the Labour Party National Executive Committee. As a junior minister, she served in three different departments, and as a cabinet minister in two. She retained a close interest in education and home affairs and contributed on these matters in the Lords many years later.

But her greatest and most consistent political involvement has been in Europe. Following the agony of two world wars and the tragic waste of lives, she wanted to help build a new relationship between Britain, Germany and France, and she spelt out the rational case for change in an early Fabian pamphlet. In 1971 she was one of sixty-nine Labour MPs who voted, against a three-line whip, for Britain to join the European Economic Community. She spoke freqently on European issues from the referendum in 1975 to the referendum in 2016.

She was of the post-war generation who were attached to the Atlantic Alliance as well as Europe. As a child, she spent three seminal years (1940–43) in Minnesota, taught at the Kennedy School in Harvard for eight years and maintains a close personal and political relationship with the United States. She also witnessed the brutal break-up of Yugoslavia in the 1990s and, since her childhood, she has had a special attachment to India.

The peak of her political career and her most demanding years was marked by her decision, in 1981, to leave the Labour Party and to launch, with Roy Jenkins, David Owen and Bill Rodgers – the ‘Gang of Four’ – the Social Democratic Party (SDP). The decline of the Labour Party in the 1970s, eroded by the hard left and the shortcomings of the trade unions, led to the 1979 general election when the Labour vote fell to 36.9 per cent, its lowest ebb since 1931. At Hertford & Stevenage, her constituency, she was one of some fifty Labour MPs who lost their seats. There was little evidence that the party would acknowledge the crisis and seek to recover.

The SDP made an immediate dramatic impact on the political scene and in November 1981, she agreed to fight a by-election at Crosby, despite a previous Tory lead of 19,272. When she won a majority of 5,289 the success carried over into the opinion polls; Gallup recorded that 51 per cent of the electorate would vote for the SDP and the Liberals in a general election. Earlier in the year, she had participated in the first discussions with the Liberal Party that led to the formal establishment of the Alliance, and in July published, with the Liberal leader David Steel, the first joint document, A Fresh Start for Britain.

However, the 1983 election proved a disappointment. The SDP/Liberal Alliance won 25.4 per cent of the vote (only just below Labour’s 27.6 per cent) and the new 23-strong group of Alliance MPs was the biggest third-party grouping since the 1930s. But the SDP won only six seats and one of those MPs who lost was Shirley Williams.

No longer in the House of Commons, she worked hard as President of the SDP but found herself increasingly at odds with the style and substance of David Owen’s leadership. She fought Cambridge at the 1987 election, unsuccessfully, and committed herself to the merger between the SDP and the Liberals. She was strong in the difficult and unpleasant circumstances when David Owen declined to accept the result when a clear majority of SDP members voted ‘yes’ to merger. So it was a relief for her when she handed over her Presidential responsibilities to the new party.

From 1988 to 1996 she taught at Harvard, but kept in touch with political life at Westminster and became, in 1993, Baroness Williams of Crosby. By the late 1990s, she had returned to her busy Parliamentary work and in 2001 was elected leader of the Liberal Democrats in the Lords, serving until 2004. But in 2016, in her eighty-seventh year, she decided enough was enough and took formal retirement from the Lords. Shortly afterwards she was shocked and dismayed by the outcome of the referendum on Britain’s membership of the EU.

Shirley Williams remains formidable in television programmes like BBC’s ‘Question Time’ and brilliant on the public platform. She never really enjoyed the House of Commons and seems uncomfortable in the collegiate atmosphere of the House of Lords. But she is persuasive in debate and peers greatly respect her across all parties and none.

Shirley Williams was a social democrat during her years in the Labour Party and is a social democrat now within the eclectic Liberal Democrats. She regarded the 2010–15 coalition government as the best available option but was uneasy about many of its policies. The qualities that were recognised by her student contemporaries have been wholly fulfilled. In addition, she has shown great resilience over the bumpy ground of politics and her personal life.

In her autobiography, Climbing the Bookshelves (2009), she describes the painful divorce from her first husband, Bernard Williams, the Oxford philosopher, her long period of being unattached and then the happy sixteen years with her second husband, Dick Neustadt, Professor of Government at Harvard, until his death in 2003. She has one daughter, Rebecca, from her first marriage. Amongst her other books are Politics is for People (1981), A Job to Live (1985) and Snakes and Ladders (1996).