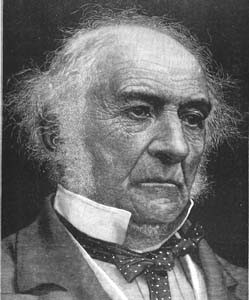 Born in Liverpool the son of a prosperous merchant, Gladstone’s political career lasted for over 60 years and included four periods as Chancellor of the Exchequer and four as Prime Minister. Gladstone entered parliament in 1832 as MP for Newark as a Tory and served in both administrations of Sir Robert Peel. Gladstone’s devotion to Peel led him to side with Peel in the Tory split over the Corn Laws and to serve as Chancellor under Aberdeen, Palmerston and Russell. As Prime Minister Gladstone and his ministers instituted profound changes to British society. His first administration, arguably the greatest of the nineteenth century, reformed the army, opened up the civil service, reformed the Poor Law, established elementary education and brought in secret ballots for elections. During his third government, Gladstone’s espousal of Irish Home Rule split the Liberal Party and lead to its defeat, however his achievements led him to be called “the People’s William” and when he died in 1898 he was given a state funeral and two future kings acted as pallbearers.